Skip to content
You Are Here:
Blog
/
My Shadow & the Second Law of Motion

Earlier I wrote about Sir Isaac Newton’s first law of motion and how it related to my dog, Rowdy, here. This inspired me to think of how I could present ways the second law of motion appeared in moments in my life.

As a quick recap, Sir Isaac Newton (1643 – 1727) was an English physicist, mathematician, astronomer, author, alchemist and theologian. Most of us can identify Newton as the person who first discovered or described the law of gravity. A concise history of his life can be read here.

Translated from Newton’s book, Philosophiae Naturalis Principia Mathematica, or The Mathematical Principles of Natural Philosopy (first published in 1687), he states: Law II: The alteration of motion is ever proportional to the motive force impressed; and is made in the direction of the right line in which that force is impressed. In more easily understood words: The rate of change of momentum of a body is proportional to the impressed force, and is in the direction in which this force acts. This information is found here. To distill this more, one could say: the acceleration of an object depends on its mass and the amount of force applied. This last statement is found here and includes a mind boggling equation.

Formalities aside, lets get to the fun stuff. One day last May as I was out hiking on a Montana evening, I noticed (not for the first time) my shadow trailing along. She seemed to be rather despondent, so I thought I would give her a bit of attention.

Here we are, at the second law of motion in action by my shadow! She left the earth with exactly the same amount of force as she applied to it. Since her hair has not yet decided to descend with her back to earth in this photo, it is clear the photo was snapped in the coming-back-to-earth phase. This has to do with gravity, yet another concept brought to us by Sir Isaac Newton.

My shadow can be rather vain at times, and demanded a photo of herself in the air.

After my strenuous photo session with my shadow, I stood in one place and gazed at her. She did not seem to be breathing as hard as I was. Soon, the shadow of Mom’s dog, Sasha, joined her.

After catching my breath, my shadow and I climbed a rise to see this.

As my shadow and I tore ourselves away from the vista and turned to trudge back down into the valley, we were rewarded with another moment to stop and immerse ourselves in the land.

Although the following has nothing to do with my shadow, much to her chagrin, it does have to do with the second law of motion. This is a snippet of Clay’s dog, Bill, as he runs after a ball. Bill is a Newfoundland and is actually a dark grey color, unlike the black commonly seen. His ears are silver, which I love. When Bill is not off with Clay, he sometimes accompanies me on walks and hikes. Bill’s passion in life is chasing balls. He finds balls just about anywhere. In this scene, we were out on an isolated ridge, and Bill appeared with a ball, and of course, wanted me to throw it.

How could you ever refuse to throw the ball after Bill looks at you with such joy and expectation?

Though presented in a lighthearted way, the second law of motion as related here refers to physical elements that surround us daily. It also can relate to our inner worlds. A good example is how our hearts quicken and our emotions become heightened in a corresponding manner to the emotional force contained within an event we witness.

The force of wonder of this quiet beginning of life sent both my heart and emotions off on their own tangent of equal force. The exquisite woven nest, the five perfect eggs and the delicate hatchlings are a miracle wrought by Nature. As the little birds sensed my hovering above, they awoke and opened their beaks wide. The instinct to do so, instilled by Nature, is a marvel in itself. Of course, they expected a grown-up beak to drop a bug into each rosy opening. I remained just long enough to see their beaks close when no juicy bugs arrived for their dining pleasure and they nestled back down together to wait. Although I kept a distant eye on the nest, I did not approach it again.

I believe the nest and eggs are those of the small horned lark, a small prairie bird known from my earliest memories. Here is a bit of information about them. 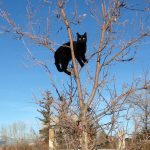