Skip to content
You Are Here:
Blog
/
Fence Lines

It’s the end of May and the beginning of a hot day.  I trudge up the hill, next to a four wire barbed wire fence.  The hawthorne and chokecherry bushes are blooming by the masses.  Their creamy white blossoms create a misty haze where the bushes grow on the hillsides and along the creek bottoms.  The blossom-scent waffles on the air; a faint, sweet wash into my lungs.  I can almost wrap myself in its creamy lace-shawl warmth.  Today I am checking the south fence of the horse pasture.  After a long, cold winter with snowbanks that buried fences in places, there might be repairs to be made. 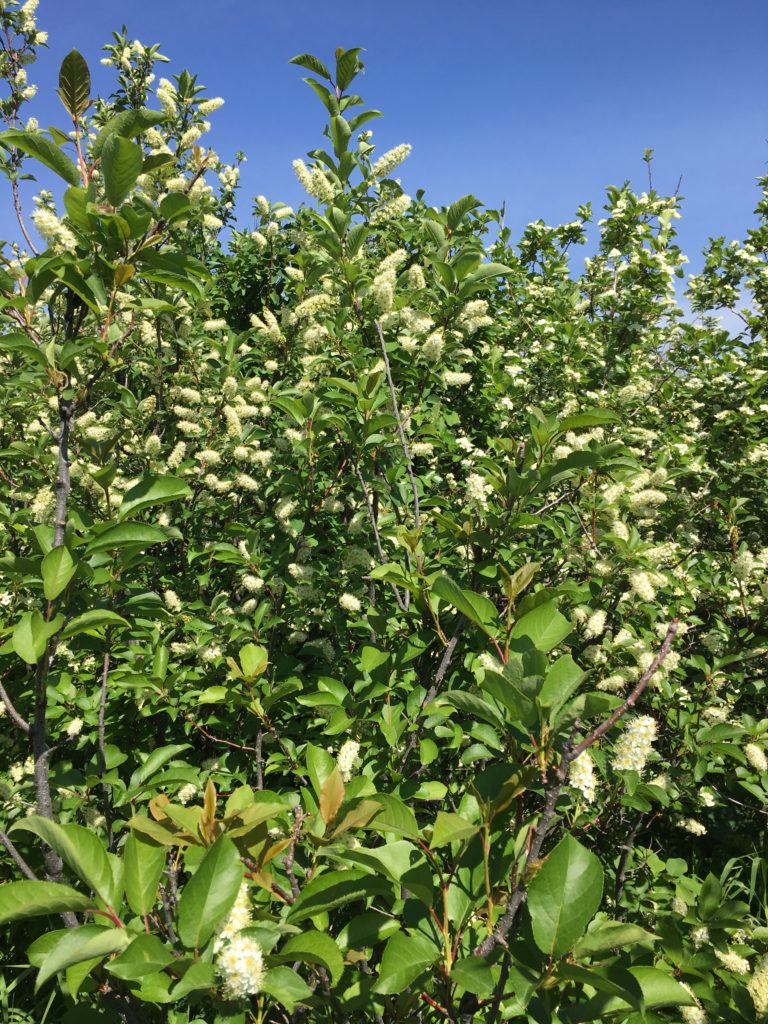 Whether the winter was hard or not, spring is the time to check fence lines, before livestock is turned into a particular pasture, or before the stock in the pasture finds possible holes in the fence.  The weight of snowbanks can break wires or stretch them baggy.  Sometimes deer snap wires by running into them.  Cattle and horses can do the same.  At times, old rusty wire gives out for no reason other than age, and breaks.  However it happens, the wire needs to be repaired.  I carry a waxed canvas bag slung across one shoulder and chest.  Inside there are leather gloves, fencing pliers, staples, and clips to fasten wire to steel posts.  In one hand, my fingers grasp a coil of smooth wire for splicing broken barbwire together.

Fence lines travel in straight lines.  It is the nature of them.  Ancient roads built by the Roman Empire were the same, I have heard.  They went straight through anything.  Fences march along on flat land;  across hillsides; up and down hills, sometimes almost too steep for a person to stand upright on; across creeks; through trees; bogs; rocks; and occasionally up something resembling a cliff.  There comes a time when fences have to change direction, though.  When this happens, there is a corner post, or brace posts at the point of change.  The corner post, generally a stout wooden post set 3′ to 4′ into the ground with about 4′ or more above the ground, holds the tension of the tightly stretched wires so the fence can change direction without falling down.

Halfway up the hill, the horse pasture fence took a 45 degree turn.  At the turning point, there was a corner post, then the fence took off in a new direction.  Straight as an arrow.  I stopped at the brace post and pushed against it with my hand to see if it was still solid in the ground.  It was, even after 40 years.  Dad knew fence building.  Splinters poked my hand as it rested on the sun warmed top of the post.  A half eaten caterpillar carcass sprawled there, a bird meal left behind.  So this is what a turning point looks like. A wooden post trussed with wire, topped off by a caterpillar corpse.  Huh. 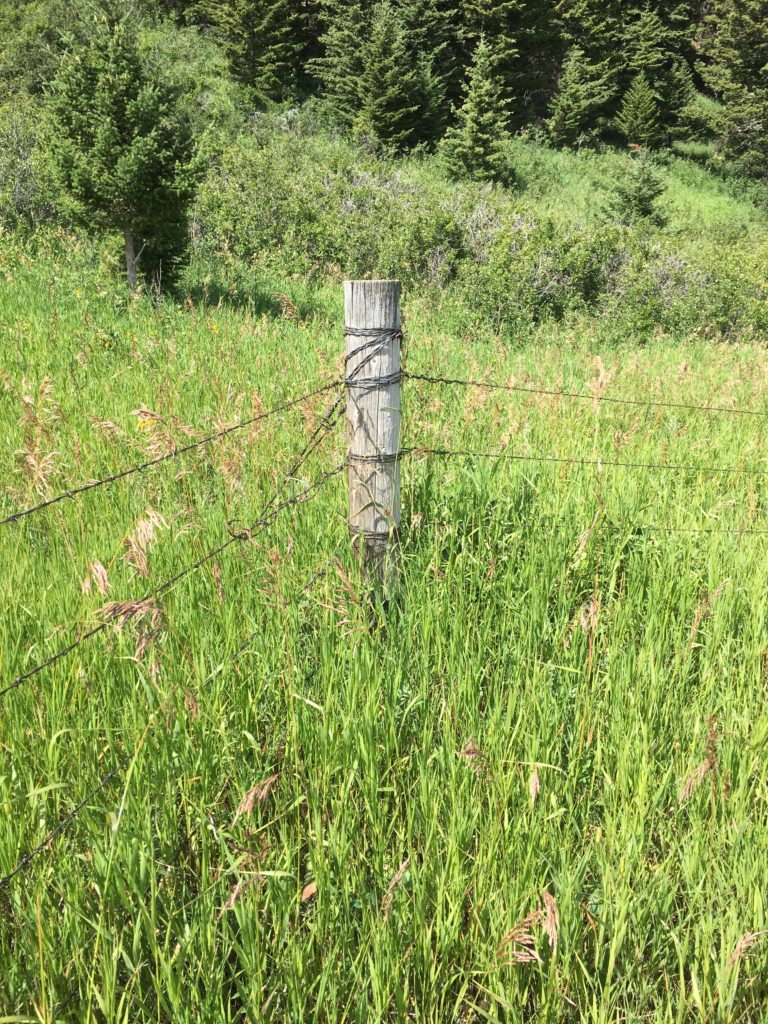 I’ve read about turning points.  They are moments our lives change direction.  Turning points can be a huge flash, or so small and quiet that we do not notice them for years.  They can be spontaneous or intentional.  Either way, they are rooted deep.  Our lives are strung on each side.  As I stood there next to the corner post, I thought about a recent turning point in my own life.

It was a cold late afternoon in January, just a couple years ago.  I had just finished trimming the hooves of two old creaky horses and was on my way home, fingers pressed to the heat vents in my truck to thaw out.  My cell phone tweedled at me, and I answered to find my friend, Clay, on the other end.  You will hear about Clay in future writings.  He is a horseman extraordinaire.  After the hello’s and how-are-you’s, Clay said there is a horse I should consider.  I was not even in the frame of mind to be thinking of another horse.  For the last two or three years, I had hardly ridden my bay, Finn.  Clay went on to tell me of a Lusitano (native breed of Portugal) who he had raised and sold.  The owner now wanted to sell the horse, and Clay had though of me.  He knew I yearned for the agility, brilliance, and connection offered by Lusitano horses.  This was my chance to get a good one, but with a little baggage.  What baggage, I queried.  Well, he bolts.  One of my biggest fears.  My heart sped up as I agreed to travel to Utah to spend a week with Clay and the horse.  When I tapped the little red dot on my cell phone to end the call, I took a big breath and blinked.  It was as if an invisible hand was placed on my shoulder, spun me, and set me off in a new tangent.  Yes, a few months later the horse, Evaristo, rode home in my horse trailer.  And yes, there are many tales to tell about Evaristo and I.  He has changed my life, made it richer and better lived.

My eyes re-focused on the fence line.  Time to get on with it.  I didn’t get far up the fence before my attention got turned away by the wild flowers.  This year, they had all sprung up at once, it seemed. 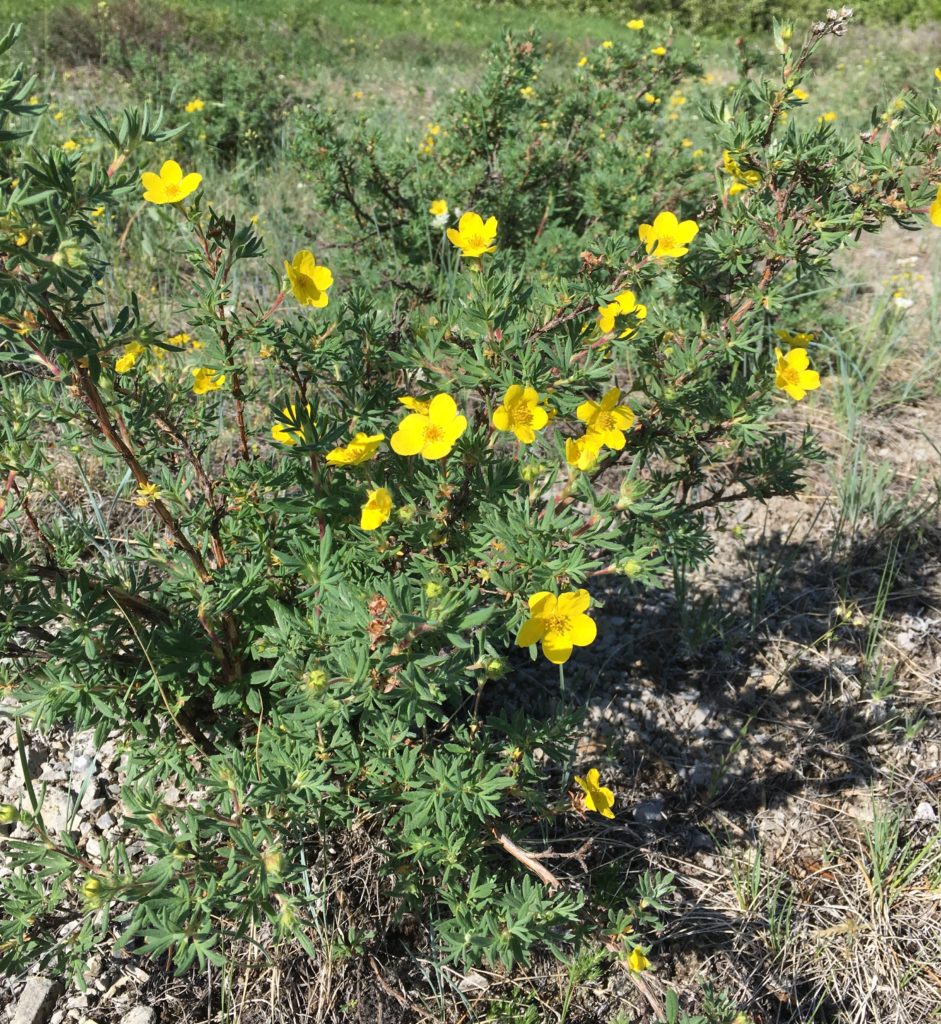 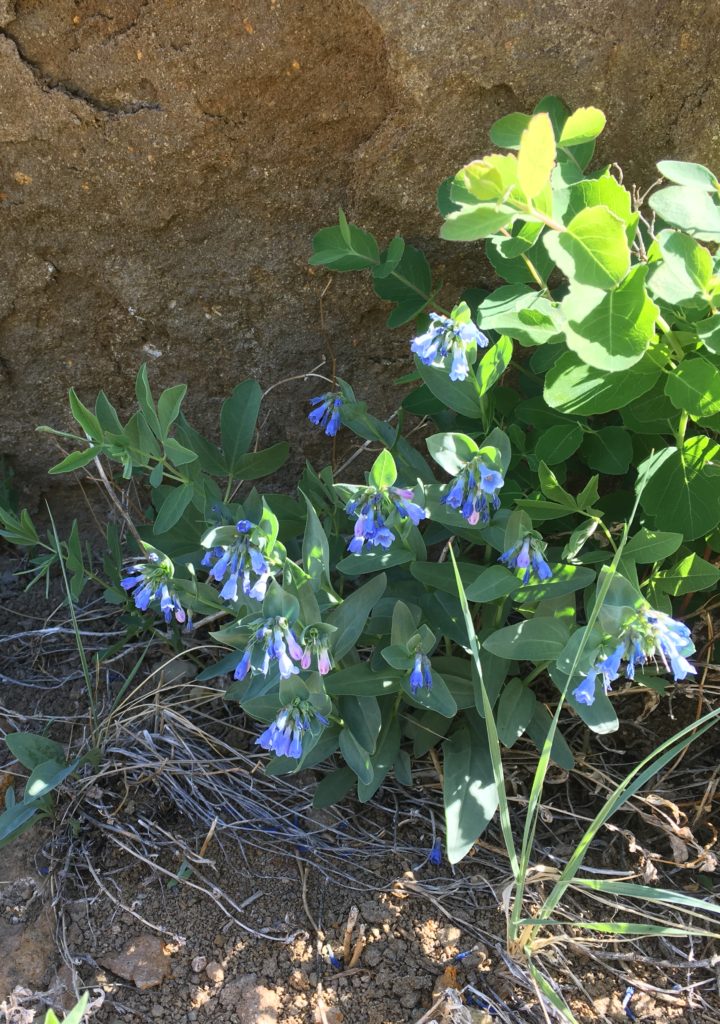 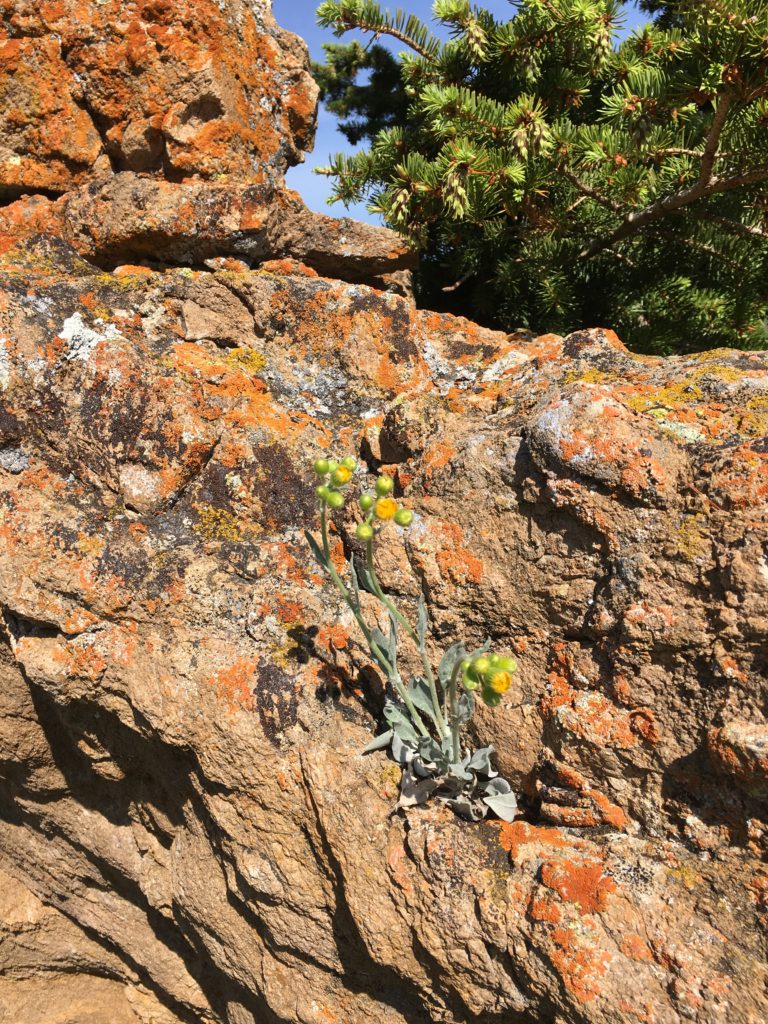 Even the lichens were out in force.  I followed along the fence line, stopping every now and then to tighten loose wires or replace a staple or clip.  Well, look here!  A young buck mule deer had jumped the fence and shed an antler on landing. 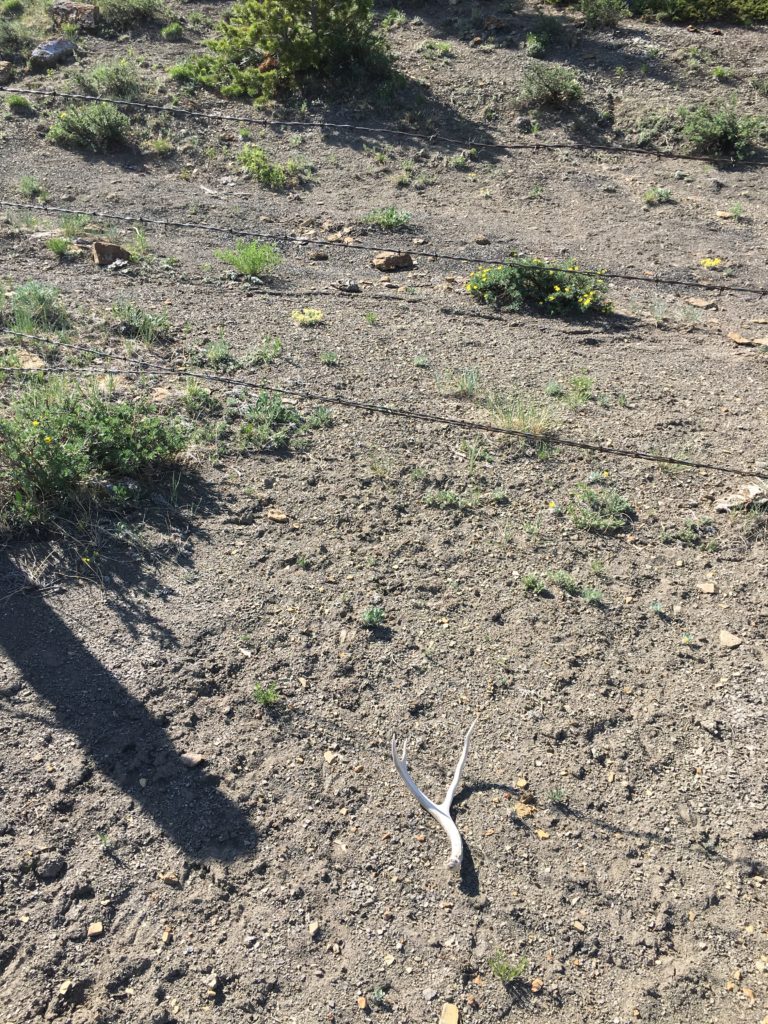 His bleached antler lay there, on the shadow-fence.  The bottom wire of the fence is twisted around the wire above it.  Where there are deer trails under fences, this gives the deer more clearance for crawling under, which they often do besides jumping fences.  Maybe the young buck caught his horn on the wire while slipping under and lost it that way instead.  Only the shadows know the story.

In the evening I settled on the porch in my favorite spot, a book close to hand.  My bare feet reveled in the cool air after the hike around the fence.  I thought again about the corner post and the antler.  The young buck’s encounter with the fence line had changed him.  He lost either his first or second antler of the year. But he would grow another set every year for the rest of his life, on and on, just like the fence line traveled.  The corner post, though, it changed the whole direction of the fence.  The fence turned at the post from a grassy vale up towards a knoll topped with tiny, flat, black shale rocks that shifted underfoot.  My feet tingled as if life shifted under them, too.

The white schoolhouse with…