Skip to content
You Are Here:
Blog
/
Leaf Courage 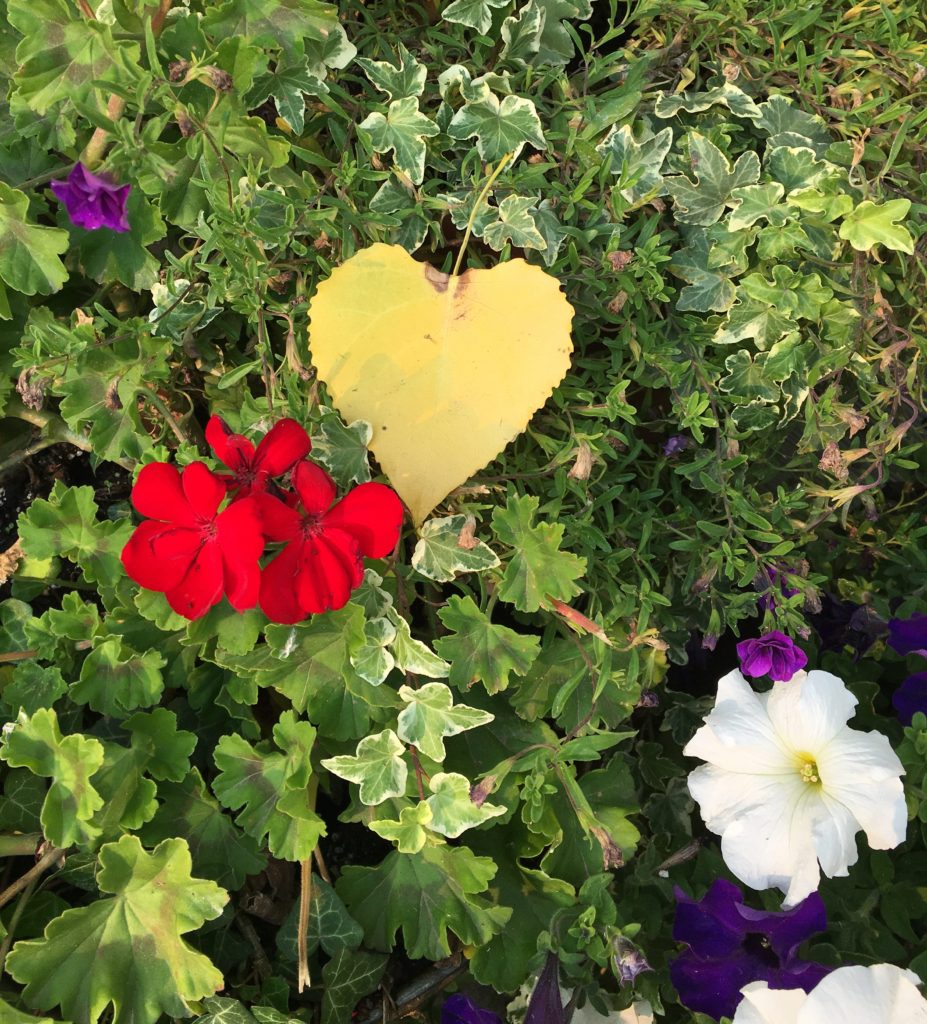 I saw it there a couple weeks ago, resting among green leaves and flowers.  A single yellow heart, its tether disconnected from its source.  The edges of the heart were ruffled and it was a bit battered with flecks of brown on its surface.  Even though a bright red flower pulsed next to the heart, and farther away a white flower blazed and deep purple flowers shone, the yellow heart’s thrum stopped my footsteps.

Then it seemed the yellow heart lifted the slightest bit and hovered there over the leaves it had rested on.  It whispered, “See me.  Feel me.”  My fingers brushed its smooth, cool surface and I felt all it was and all it had been.

Really, the yellow heart was the leaf of a cottonwood.  But this did not mean the leaf lost any of the tale it told.  It had left its tree early.  I had learned the previous year that trees themselves sever the connection between them and their leaves when it is time for them to fall.  A parent who sends its young out into the world.  Then they fall…

As I turned away from the yellow heart-leaf, I thought about how leaves live and where they fall.  It’s easy not to think about these things, even when we pad over carpets of golden leaves on the ground, or fling ourselves into crunching piles of leaves.  Leaves begin each spring as tiny buds. They swell and swell until one warm spring day, they pop like a kernel of popcorn, into a perfect miniature leaf.  Then they grow.  Their stem is a bond to their tree, who feeds them as the leaves breathe from the atmosphere.  They hang out there, in all weathers.  They live through light and dark.  What do they see there, suspended over the earth?  A tiny fawn, born in the dark of night under the concealment of the leaves?  Or, the red flash of a fox as the sun rises, a mouse gripped in its jaws for its young?  Above them, the leaves may spot the first weary arrival of spring’s songbirds.  They rustle and call to the birds, “Rest here.”  And the exhausted flock settles among the murmurs of the leaves, heads under wings.

Leaves and air are siblings.  They surround one another, like a pile of kittens.  The leaves filter and freshen air, and air gives the leaves their voice.  Who has not stopped to listen to the song of the leaves as the air moves through them?  Some days it is almost inaudible and other days it is a clatter of leaf bodies against one another.  Other times, it is a steady melody which can become a broken tune when the wind rises and falls.  No matter their chorus, I love listening to the leaves because they connect me straight to life in a pure form.

As autumn gets closer and closer, the leaves begin to fall.  At first, it is one or two here and there and I find them like little unexpected gems.  Then as autumn deepens, more and more leaves fall.  They cover the ground in places in all their glory, and swirl and dance in a last conversation with the wind.  Some stubborn leaves cleave to their trees through the whole winter, even though the trees have cut of their nutrients.  Leaves that are dead to life; brown, brittle, and dull.

Last autumn, I walked along an irrigation canal in evening’s mellow light.  I like to walk there.  There are trees and bushes all around, and a grass covered trail.  A yellow and musty-leaf scent filled the air.  A slight breeze blew a brilliant orange-yellow leaf in a spiral fall to the earth.  It came to rest against still-green grasses.  As I watched it nestle in, another leaf touched its butterfly-weight onto my shoulder.  It hung out there for several strides before it tumbled down my back.  My mind thought about how leaves fall.  So many ways.  Some fall fast and straight down.  Others drift slow and aimless, as if they have no purpose.  Sometimes they are ripped from the tree by angry winds and are flung out into the world to crash to earth.  Or they part from their tree bit by bit as they cling until the last moment.  But sooner or later, most of them land on the earth, unless they are interrupted by a building, vehicle, or container of some sort.

Leaves live at the mercy of the elements, or of insects or animals that might eat them.  But no matter what, they do their thing.  They breathe and tell their story, whether anyone is listening or not.  They exchange their shades of green for the majesty of the sunset colors of autumn.  They show us, in their moment of grandeur, how to let go.  And fall.  And land.  And then look upwards forever.

Courage…from the Latin cor, which means heart.  The original meaning of courage meant to stand by one’s core.  Or heart.  The yellow heart-leaf could be a contradiction for those who argue such things.  Yellow, fear.  Heart, courage.  The heart-leaf itself confides, “Yellow for a leaf IS courage.”

The white schoolhouse with…