Skip to content
You Are Here:
Blog
/
Ways of Water

The wet salty mineral smell of the sea wrapped around me, held me upright and pulled me towards the waves. Sea gulls dipped and glided below clouds a shade darker than they. Their white heads stood in stark contrast to the shades of grey, and their yellow beaks glowed. Their strident calls fell in sharp notes into my ears, reddened by the fresh west wind. At my feet, dull tan sand gleamed a matte wetness, firm as each wave scrubbed it and returned to the sea. A voice behind my right shoulder explained, “Each seventh wave is larger than the others.” The English accent of Michael’s words threaded through my staring senses and registered somewhere in a crevice of my brain that had until now somehow escaped the pull of the ocean.

On that day twenty years ago, I was 31 years old. There I was on the southeast coast of England, captivated by the froth-edged milky white curl of the waves. The roll of each wave as it sought land to touch and retreat from was a sentence my eyes were glued to. As a wave unrolled onto the beach and slid backwards to its kin, my attention and senses went with it, to be enveloped by the next budding wave and carried forward again to the sand of the beach, the end, the period in the wave’s story, then sent back to rewrite and rewrite, and endless circle of editing over and over of the wave legend.

Every seventh wave, huh! I tugged myself loose from the thrall of the waves. I stepped backwards from the beach. A legion of undulating waves, pewter grey, faced me. One flattened itself on the sand grains of the beach and its remnants scrabbled backwards to the safety of numbers. I counted seven waves behind. The lucky seventh wave appeared the same as all the rest. But wait! I had to find the biggest wave first, then count backwards. In water or time. I looked farther out to sea. There it was! A wave-to-be-born whose back rose higher than its companions. My eyes locked on it as it rolled to shore. As it broke with a splash, I counted behind it. Yes! The seventh wave was indeed larger. For several minutes, I stood in the grey day, listening to grey birds and grey waves and saw every seventh wave rise above its neighbors. I wondered why this was so, and where in the ocean there was a beginning point for the seventh waves to rise from.

Webster’s New World Dictionary, Third College Edition has 21 definitions for the word “way”. One is “a means of passing from one place to another.” A second definition is “a path in life.” Or, a “distance (a long way off).” Many meanings for a three letter word. We use “way” every day without thinking much about it. “Way over there!” I might exclaim in answer to a question regarding a deer who just bounded past. A friend might comment when encountered at the small town post office where I live, the center for catching up on community happenings as we dash in and out for our mail and dash in and out of the lives of others through the use of our tongues. “Sadie has at long last found her way. She has left her husband and enrolled in art illustration classes at the university!” I am happy. Although I do not know Sadie beyond acquaintance level, I feel warm inside that she has found her way. My own way twists and turns, like that of a course of water that I walk next to. I watch every move of water as it goes on its way. Go on its way it does. Water is powerful. Deng Ming-Dao says in his book Everyday Tao, “Although it can be soothing, comforting, and cleansing, it can also be enormous, mighty, and overpowering. Its nature is constant. It is true to itself at any extreme.” It sounds like how I want to be. It sounds how I want a friend to be. Strong. Soothing. Constant.

After my encounter with the sea, bodies of water became my solace and a source of life energy I never would have guessed at. A huge surprise. I was raised far from much water. A ranch in north central Montana was hardly the epitome of excess water. Most years, ranchers hoped and prayed for enough rain to grow range grass for the cattle and hay to be put up for winter. Rain saved us from what seemed the perpetual “dry year” when each thunderstorm that came over was eyed and studied mercilessly in case its lightening would ignite the feared wild fire. Other than the rain, we had small streams that arose from springs, and the occasional reservoir for stock water. That was it. I never gave water much more thought. But after the sea, I found inside a vast yearning for water.

Even though water drew me in ways I did not understand, I did not care overly much to be on the water. A boat felt insignificant and fragile. To step off it meant sinking out of sight. There was no solid surface to stand on. If a person fell overboard, they could sink and die. Down deep far from the sun to be chewed on by fishes. And who knew what lurked beneath the surface! No way. Just being next to water was enough for me. One day on the coast of Oregon, I stood in the living room of a house perched right on the shore line. The sea was wild, and my inner self was, too. The lady of the house rustled about in the kitchen. Waves stretched tall and ran helter skelter to thrash themselves on the craggy black rocks of the shore. Wind whipped the sea spray against the bank of windows that faced the sea. The rime of salt left behind blurred and softened the view. It was as if I looked through a veil from one side of the world to the next. I paced back and forth next to the windows. “Why do I love being next to water? Even wild water?” I asked the air molecules. The lady in the kitchen overheard and offered, “Water releases negative ions, which soothe and feed our senses. They lend us energy and vitality.” So maybe that was it. Besides water to drink being necessary for life, it also fed our souls and life force.

Inside, I carried the pull of the sea back to the land I grew up in. The land of native prairie grasses and little seeps of water trickling from a impression in a hillside. I noticed the water in new ways. And I could feel these smaller and quieter waters, now. The power of the sea had opened this need inside, and I would be forever conscious of water’s offering. The little springs, who soaked through the thick, loamy soil to birth a miniature stream who grew and grew as it fell downhill, were a wonder of magic. As I rode my horse through the Bear Paw Mountains on the ranch where I was raised, I often came across known or unknown springs. Their persistence in rising forth through rock and soil made me feel tender and invincible all at once. I sat next to them and listened to their watery sighs as they surfaced. Sometimes they dripped over mossy logs, to splish in a little dark pool that made me think of tales of the lady of the lake who looked deep into the inky water and told of what was to come.

The small streams in the land where I grew up splash and gurgle to themselves and to whomever may be nearby. They trundle downhill no matter what. The downhill might be steep, or so gradual as to be almost indiscernible. Or somewhere in between. If the streams cannot go over or through an obstacle, they go around. Here is a lesson of the way. There is always a way; a path, a method, or a horizon to be reached for.

On a recent warm late summer day, I walk along the canal. Beside me flows irrigation water bound for hay fields and crops. It has traveled far, some say as far away as Canada. I like to amble along the canal. The water, murky here, is quiet and peaceful as it follows its path. Yes, the canal is made by man. But the water doesn’t care. It still flows, even though it does not carve its own way. Its gentle glide is a balm to my soul. As I follow a curve in the canal-side trail, I spot the first yellow cottonwood leaf of autumn. It lays flat on the tawny water, borne along by the silent current. I stop. It floats past, resolute in its journey. As the leaf drifts out of sight around a bend, it is a wordless metaphor for the passing of the seasons. I sigh and turn for my way home. 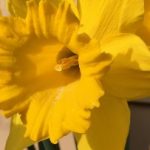 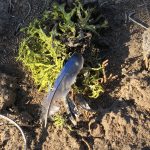 Good day to all!… 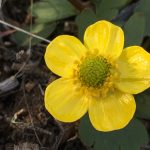